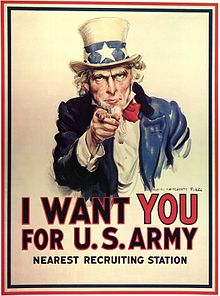 American illustrator J.M. Flagg created his iconic image of Uncle Sam for Army recruiting posters in 1917. He borrowed the nickname from the troops themselves. They’d affectionately dubbed an Army meat supplier Uncle Sam for stamping the letters “US” on steaks headed to the front during the War of 1812. Flagg loved the story and decided it fit his image of what government ought to represent. Our perception of government may have shifted somewhat, and arguably pork has replaced steak as Washington’s meal of choice, but there’s still one feast every American deserves: Tax-deferred compounding and 100% dividend reinvestment in a 401(k) account.

Congress first introduced language on tax deferred savings plans into the U.S. tax code in 1978. Today, more than 88 million Americans participate in at least one of 638,390 registered defined contribution retirement plans according to the American Benefits Council. The number may sound impressive, but there’s a problem here. Only 54% of working Americans engage in pretax retirement planning based on data from the Bureau of Labor Statistics. This is absolutely crazy. Pre-tax investing is the single greatest mass market opportunity for individuals to build wealth and retire in time to enjoy the fruits of their labor.

This last point is the real kicker, especially when you consider reinvesting dividends without paying tax. You put the money in tax-free, it generates income tax-free, and you reinvest it tax-free. It’s a triple whammy, and it repeats every year. You are compounding your money on the government’s dime. 401(k) accounts represent the single most advantageous retirement plan available and we should all be participating. THANK YOU Uncle Sam.

To better illustrate the point, consider returns on the S&P 500 Index relative to its Total Return Index, where dividends are reinvested pre-tax and commissions are zero. Every time a company in the index pays a dividend, the amount automatically goes towards purchasing additional shares.

The difference is staggering when seen on the chart above. The Total Return Index produced nearly double the return over the same period (1,120% compared to 658%). The reason is simple: Dividends were reinvested pre-tax and then compounded pre-tax for 25 years. Again, it’s as though the Government is giving you an interest-free loan, enabling you to reinvest dividend income without paying tax. Yes, you will eventually have to pay taxes on the proceeds when you withdraw funds in retirement, but you will have earned income on the Government’s dime for decades. This is a very good deal.

Let’s put some real world numbers on this to further prove the point. We’ll be especially conservative in our calculations. We’ll assume the company does not match employee contributions, and the IRS maintains its current maximum of $18,000 per year rather than adjusting upwards for cost of living. Plugging in actual average annual returns from 1990 to 2015 of 8.5% for the S&P 500 Index and 11.4% for the Total Return Index (Bloomberg data), the outperformance of dividend reinvestment in a 401(k) exceeds a million dollars.

 The same S&P 500 stocks in a 401(k) account  produced nearly double the return of a standard index fund. In this real-world example, $18,000 contributed annually became nearly $2.1 million over 25 years. This is the power of pre-tax investing coupled with compounding over time. For all the talk (and effort) of finding the next great growth company in Silicon Valley, buying consistent dividend-paying companies and reinvesting the proceeds on a tax-deferred basis works exceptionally well.

Most 401(k) plans offer employees multiple investment funds from which to choose and indexing to the S&P 500 will likely one of them, possibly even the default option. However, choosing an index fund does not guarantee dividends will be automatically reinvested. You have to read the terms of each fund carefully and then either chose a fund which specifically reinvests dividends, or elect dividend reinvestment through the Administrator. 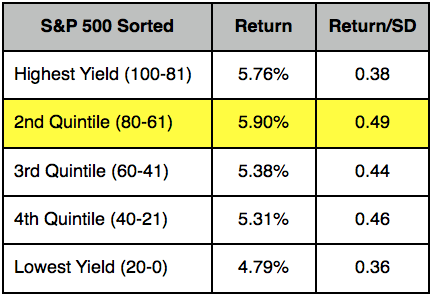 For the vast majority of people, selecting an index fund which reinvests dividends is good enough… especially when $18,000 invested annually into a broad index fund can produce a $2.1 million nest egg in 25 years.

I also recognize some of us appreciate the benefits of stock selection. The investment team at Strategas Research Partners L.P. looked at the risk-adjusted returns of S&P 500 component stocks sorted by dividend yield. (This is simply return divided by the volatility of returns over time, measured by standard deviation). Their research showed the risk/reward tradeoff is maximized when investors buy the second decile of highest yielding stocks (i.e. stocks ranked 61-80% in terms of yield) and rebalance every 6 months.

To confirm their results myself, I back-tested the strategy with Bloomberg Analytics on the Dow Jones Industrial Average (DJIA) between 2000 and 2015. The second quintile group outperformed the overall DJIA by a margin of three to one, returning a cumulative 151% compared to 52%. The point is, if you participate in a self-directed 401(k), you have greater leeway to select stocks in your portfolio. Uncle Sam presents one gift, and data presents another. Combine them, and you’re building wealth.

Clearly, EVERYONE should have a 401(k) plan and begin saving as early as possible. In addition, everyone should maximize the full benefits of pre-tax investing by reinvesting dividends earned in a 401(k) plan AND utilizing company matching programs where possible. Finally, hands-on investors may be able to produce additional returns by utilizing the proven dividend selection strategy outlined above.

At the very least, educate yourself on the full spectrum of 401(k) benefits and options by speaking with your financial advisor and visiting IRS.gov.