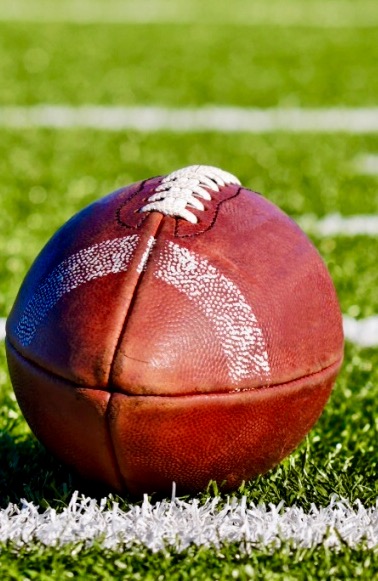 Change of Possession
Ten Offensive Names as Defense Gets Benched

Imagine a football game where linebackers scored and quarterbacks tackled… not just the occasional pick six or on-sides kick… but quarter after quarter. Fans would shout in disbelief and coaches would throw their clip boards in disgust. If it happened the following week, there’d be talk of rewriting the playbook. A third episode would confirm the trend. Breathless commentators would explain how the world had changed and why It’s different this time. The best players would aspire to defense, and general managers would build franchises around safety. Impossible? Look at Wall Street’s winners of the past two years. Utilities and Telecoms have marched up the field to dividend cheering crowds as flashy Semis and Banks have languished on the bench. Dee-fense has ruled, but not any more. Coaching staffs dusted off the old playbook at pre-season in July. Look at the scoreboard now. Offense owns the field.

The TradeOffensive sectors have dramatically outperformed since the beginning of July. Semi-conductors have led the way, reflecting a perception that rising economic growth creates demand for goods and the sensors which increasingly power them. Energy is finding a bid as oil rises to $50, and banks are finally attracting buyers on the assumption rising rates will improve net interest margins. As for the dividend paying sectors, they are now officially off the roster.

Several factors have contributed to the pivot from D to O, and like any close game that keeps us on the edge of our seats, it’s not one-sided. Consider the current field conditions:

The combination argues for a move into cyclical, high-quality growth names… cyclical to reflect an improving labor market and rising rates, high quality to reflect the importance of selectivity with GDP still below 2%. I also want to deploy capital away from the Division I names of the S&P 500 which get all the attention, focusing instead on faster growing companies of the S&P 400 Midcap Index. I think this is important at this point in the cycle. Macro talk from the Fed has dominated headlines and portfolios for too long. If we believe in the thesis of U.S. economic growth, we should place our bets on companies with good field position. To me, this implies midcaps not large caps, as they have more opportunities to grow. Another key point, my stock screen for high quality recruits prioritizes strong cash flow and low debt. Play ball.

High Quality Recruits
Only 10 of 400 Make the Cut 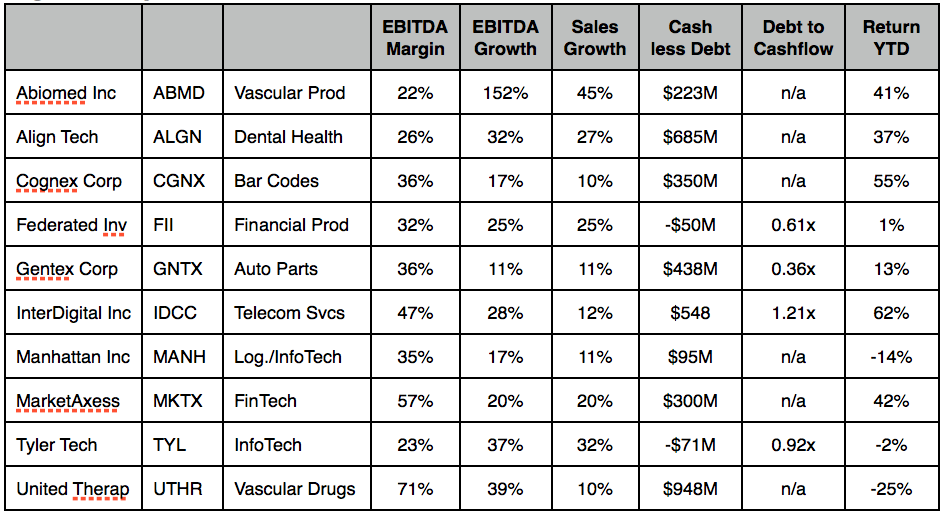 This screen generated ten buy candidates from the 400 companies considered. On average they are up 17% YTD. They generally serve niche markets are are growing rapidly. Six have no long-term debt (denoted by n/a above under Debt to Cashflow). Seven offer attractive entry points, two are respectable (IDCC, TYL) and FII needs to find a tradable bottom. Charts for each are shown below.

Astute readers will recall MarketAxess (MKTX) as the subject of my Robo Trader write-up on July 22.  The company is turning the bond market upside down by providing a listing platform where buyers meet sellers directly, introducing transparency and displacing dealers in the process. The company reports earnings on October 26 and is currently trading at its support line. 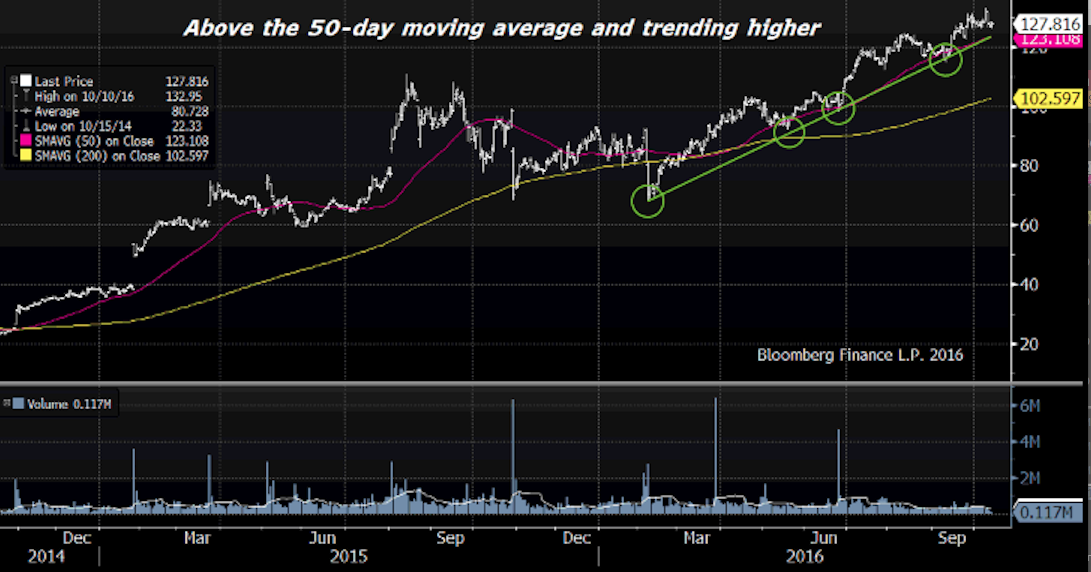 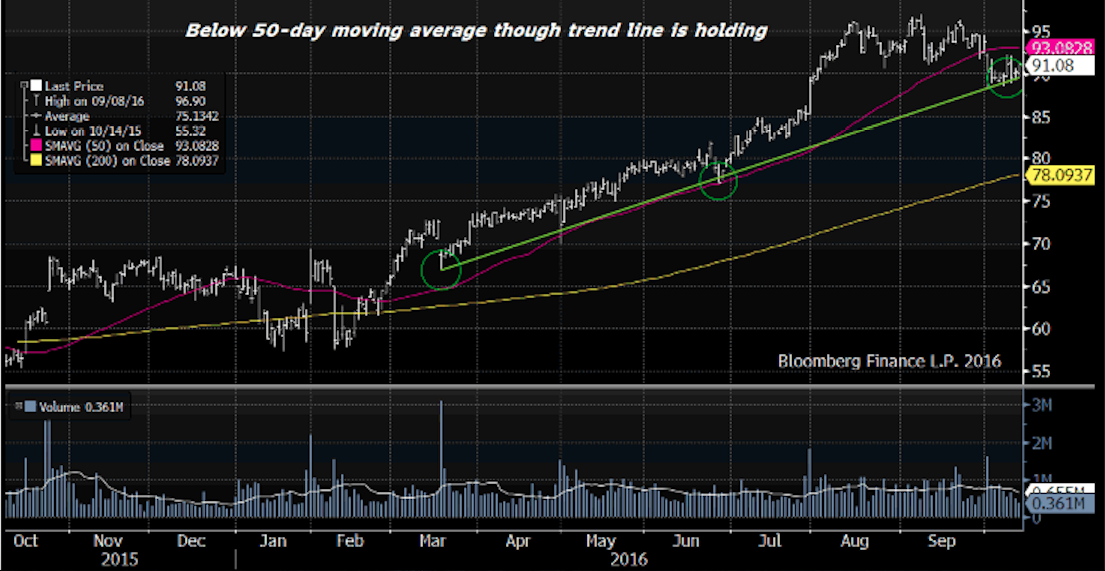 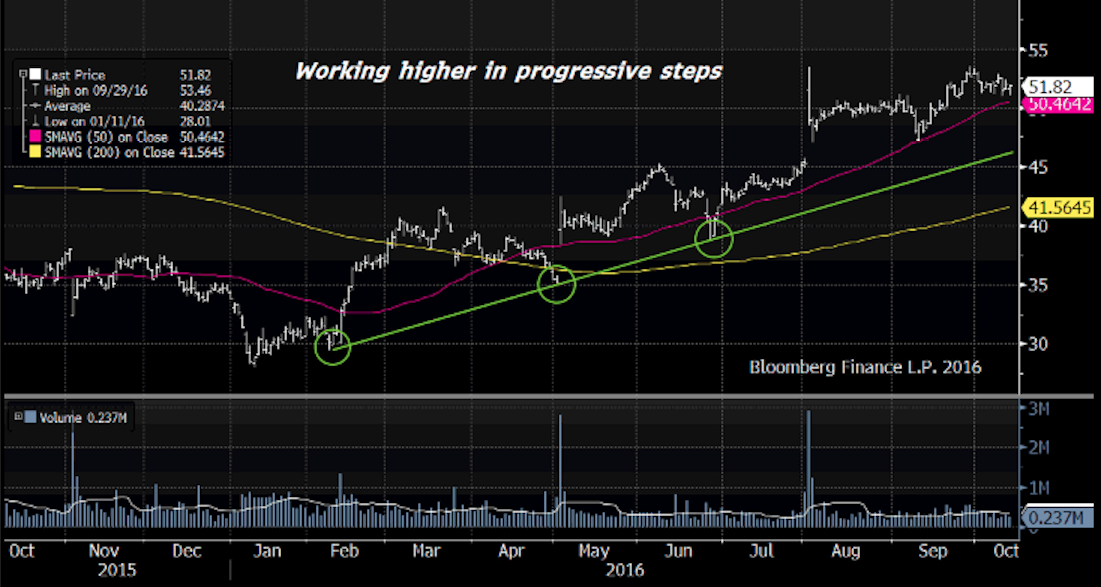 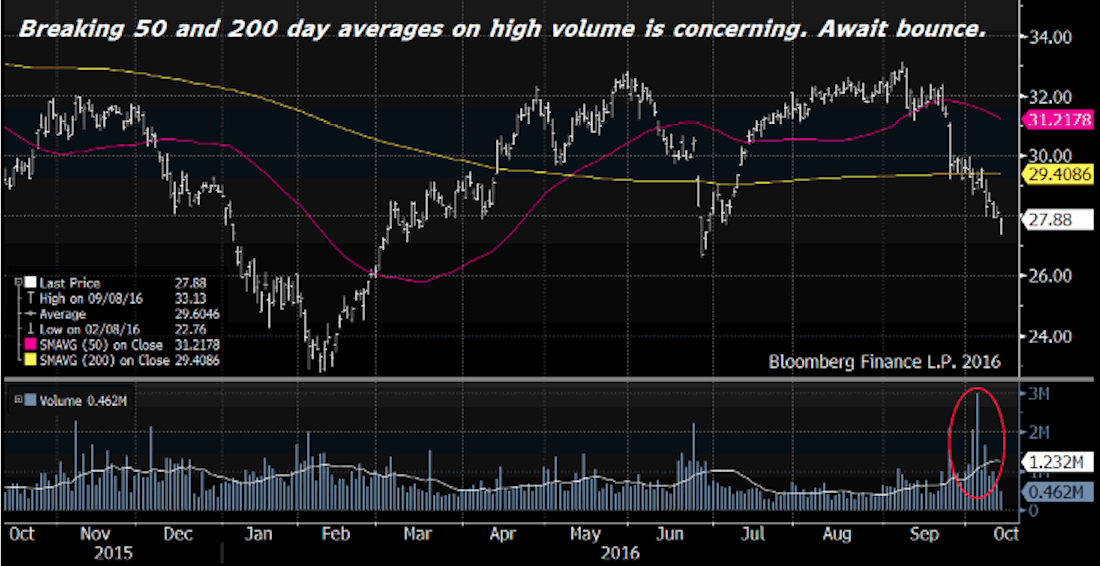 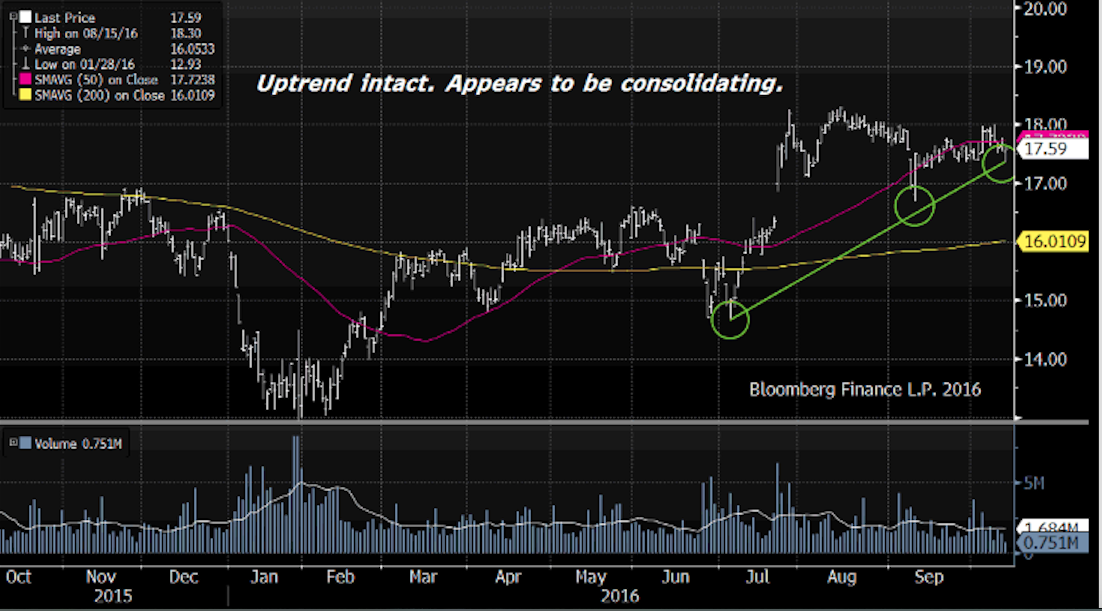 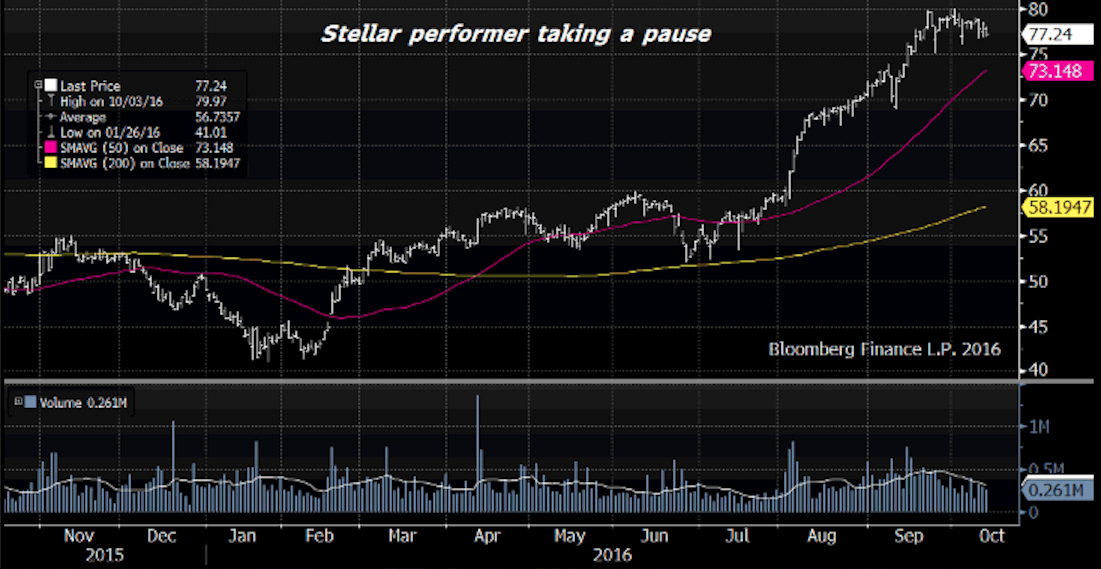 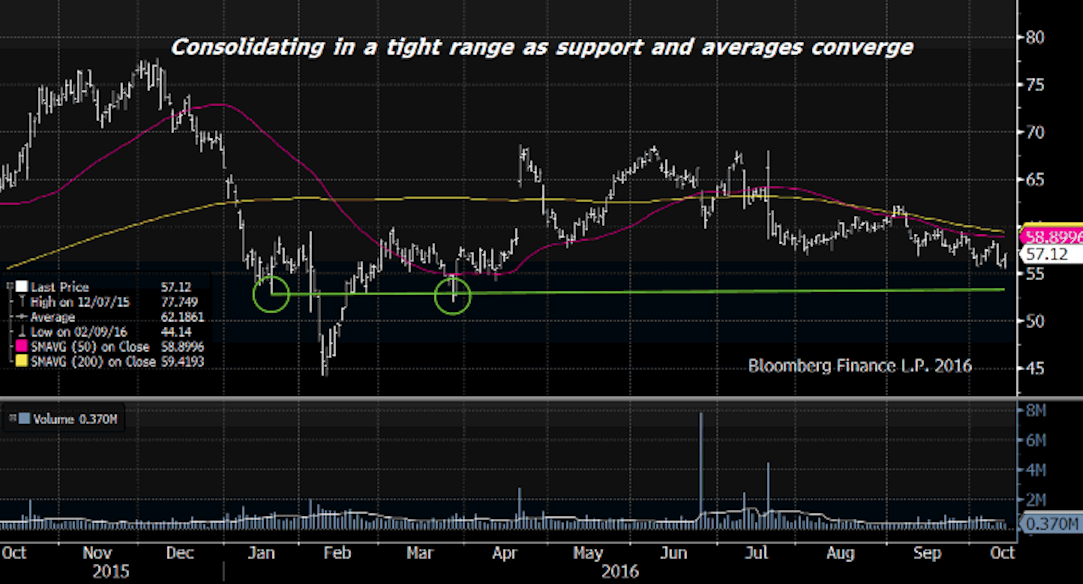 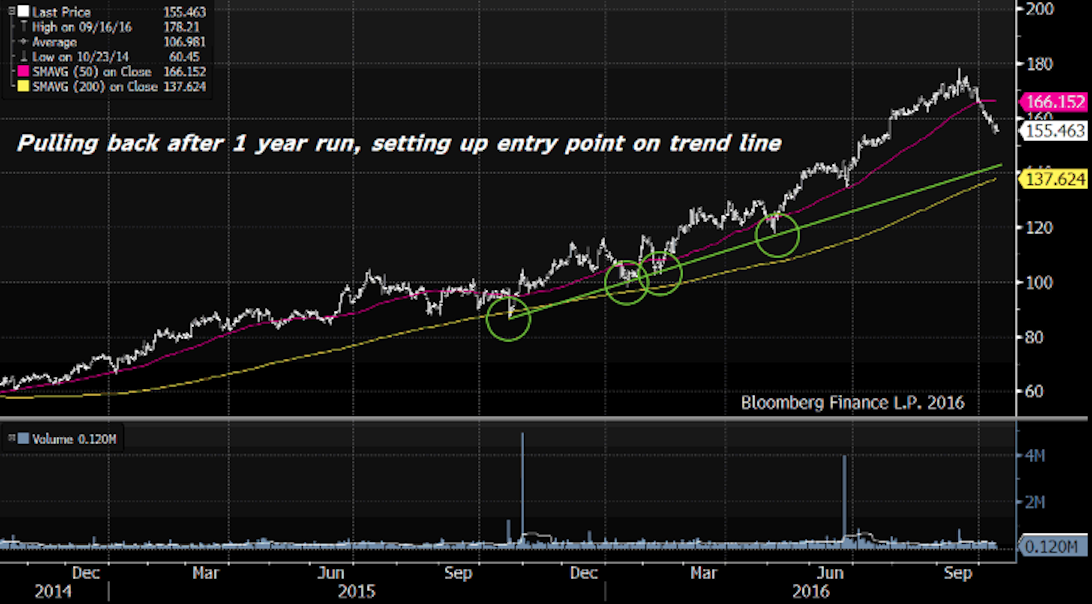 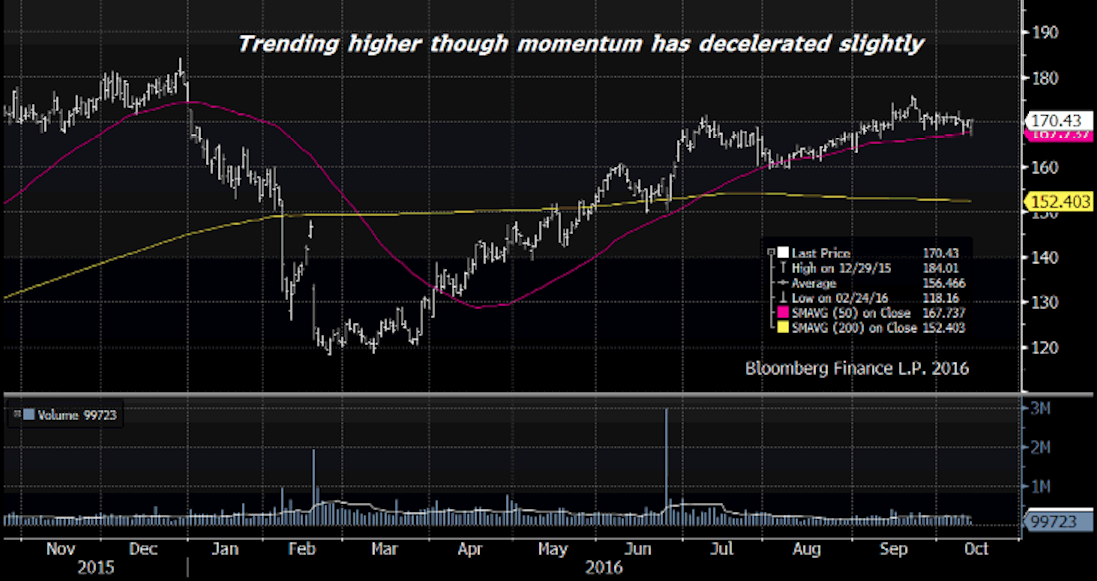 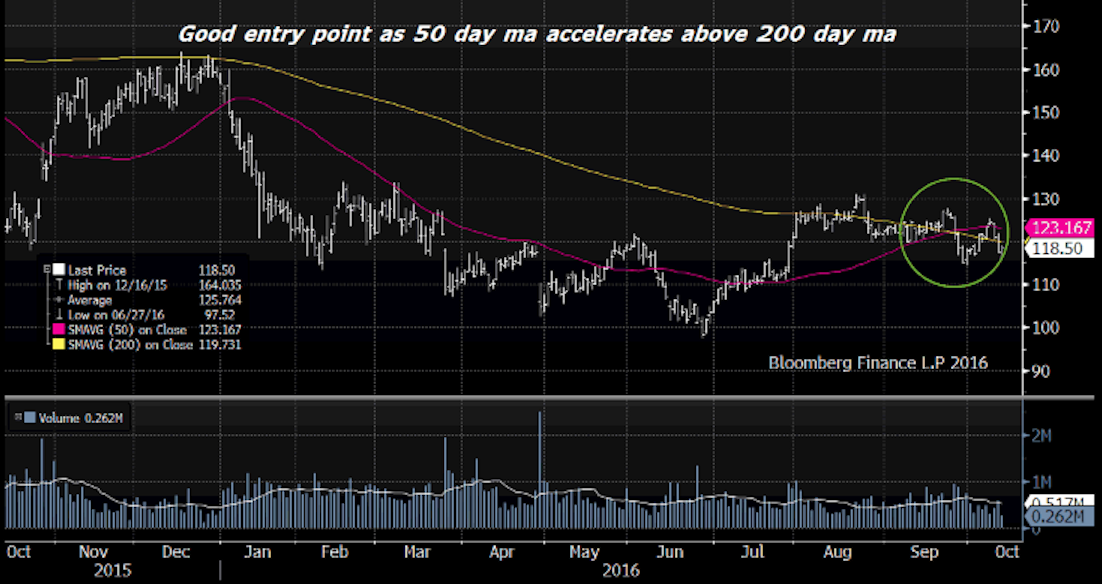