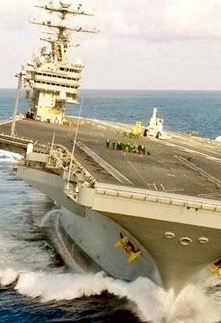 The TradeThe USS Harry Truman stretches three football fields in length and provides pilots like my friend Steve about 4.5 acres of flight deck when it’s time to land. To say the ship is big is to say the sun is bright or the the moon is high. These magnitudes are so unimaginable we don’t have the words… and one is even man-made!. Steve and I catch up every year at our high school reunion and I pepper him with questions like how fast can a carrier go, and how long does it take to turn around? The answers are understandably classified, so our honorable aviator suggests cool YouTube links https://www.youtube.com/watch?v=d4KnCqcTEOU and offers nebulous comments along the lines of “Faster than you’d think, but still a long time.” Carriers need time, and so do investors. As we debate the IMF’s warning last week about unsustainable leverage, I find myself wondering: How long will it take to turn this giant around and put low rates in our wake?

The International Monetary Fund (IMF) sprang quite literally from the ashes of WWII in order to foster global stability and long-term growth through international trade, monetary cooperation and focused lending initiatives. Its 189 members gather twice annually to offer an assessment of their current outlook and to highlight potential flash points. Their recently published Fiscal Monitor ahead of the Oct 7-9 meeting in Washington offered a particularly sober assessment, arguably a shot across the bow aimed squarely at low rate loving central bankers.

“At 225% of world GDP, total global debt (government, household, and non-financial corporate) is currently at an all-time high, which as documented in an extensive literature carries great risks. The reason is that the absence of fiscal buffers curtails the ability to conduct countercyclical fiscal policy, especially in emerging market economies. Highly indebted borrowers will sooner or later decrease their consumption and investment, as they are unable to service their debt and can no longer borrow. This is particularly relevant now… private sector leverage has increased significantly over the past few years… setting the stage for a vicious feedback loop. It is clear that meaningful deleveraging will be very difficult without robust growth and a return to normal inflation [neither of which is currently apparent nor remotely evident in the forecasts].”

Bloomberg published the IMF’s lead chart on the front page of its own Economic Brief to underscore concern about global leverage and further the conversation. NEVER has the world reached such high levels of debt. The IMF’s calculation includes all debt owed/issued by governments and non-financial corporations globally, as well as all borrowings held by households globally. It’s a comprehensive figure and a loud wake-up call. We’re not simply talking about debt issued by central bankers which can write checks with the stroke of a pen and increase money supply with touch of a printing press. This is all of us.

Two-thirds of the $152T in debt cited by the IMF is private sector, meaning Main Street and Wall Street are leveraged to the hilt. It’s 2008 all over again, and the vast majority of countries around the world have piled on, from developed markets to emerging markets. The IMF data paints quite a picture. Notice Hong Kong and China at the bottom of the charts below. Their private debt levels have risen by 110% and 70% in GDP terms since 2008. 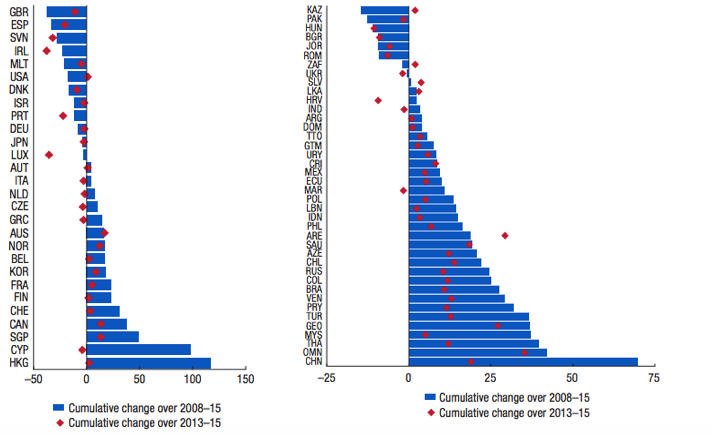 IMF Fiscal Chief Victor Gaspar sounded the bosun’s whistle at last week’s summit, telling attendees “History has taught us that it is very easy to underestimate the risks associated with private debt.” These are sobering words for a polite statistician, but hardly news to global portfolio managers who’ve already ordered helmsmen to starboard. Their new course is evident in the churn of the past several weeks. Capital is steaming back to port.

Bridgewater Associates Founder Ray Dalio sits atop $150B in assets, much of which is deployed in global bond markets and he too is concerned. On the same day the IMF released its none-too-smiley Fiscal Monitor, Mr. Dalio addressed the New York Fed’s 40th Annual Central Banking Seminar.

“Long-term debt cycles are approaching late-stages. Central banks are pushing on a string, both because interest rates are approaching their maximum lows, and because the effectiveness of QE is approaching its limits as risk premiums and spread compress. This is a global problem. We see an intensifying financing squeeze from slow growth, low return and high debt. It would only take a 100 basis point rise in Treasury bond yields to trigger the worst price decline in bonds since the 1981 bond market crash. And since those interest rates are embedded in the pricing of all investment assets, that would send them all much lower. Rarely do we as investors get a market that we know is overvalued and that approaches such clearly defined limits as the bond market right now.”

If you think Mr. Dalio is either alone in his view or simply overreacting, please think again. Bill Gross first sounded the alarm on negative rates in Europe over a year ago. He calls German Bunds “the short of the century.” On Friday October 6, after the U.S. Department of Labor released a September unemployment rate of 5.0% (the highest since April) and disappointing non-farm payroll gains 154k (only marginally above the breakeven figure to accommodate population growth), Mr. Gross addressed the current debt bubble on Bloomberg.

“Because of this highly levered world, which I do not think we’ve experienced as far back as 70 years, central banks cannot afford to raise rates… because 50 or 100 basis points might rake the system. Return is not proportionate to risk, and capitalism itself at the margin starts to turn inward.”

When markets turn inward, capital goes home and it doesn’t return for a long time. This problem is especially acute for emerging markets, where portfolio managers have turned in search of yield given unacceptably low returns closer to home. Pros look at the J.P. Morgan Emerging Market Indicies on sovereign and corporate bond spreads (JPEIGLSP and JBSSCOMP Index <GO> on Bloomberg, respectively). Spreads have contracted significantly over the past year, and while not at all-time lows, they are getting close. Put another way, there’s a lot more room for them to widen than to contract. Helmsman: Hard to port!

You can see the opportunity quite clearly on the chart of the PowerShares Emerging Markets Sovereign Debt Portfolio ETF (PCY). In addition to rising significantly this year as capital moved into the region, note how the index has fallen hard each of the past three Decembers as capital repatriates into yearend. Combine seasonality with huge inflows and two-fold price appreciation relative to the past three years, and I see something which begs a call to stock loan… I need a borrow and I want to go short.

PCY trades an average of 1.7M shares per day ($51M notional). It holds 86 positions in the sovereign debt of countries across the globe. The largest single country exposure is Venezuela at 4.27%, followed by Brazil, Columbia, Indonesia, Kazakhstan. Top ten holdings account for 16.75% of capital. Dividends are paid monthly and the fund yields 4.90% annually. If you are short, you are also short the dividend, so the monthly cost is 41 basis points. You can also short corporate debt in emerging markets via the iShares J.P. Morgan USD Emerging Markets Bond ETF (EMB), though its dividend yield is slightly higher at 5.18% and the chart offers slightly less room to fall. My trade is to short PCY above $30, with a target of $27 by December 31.