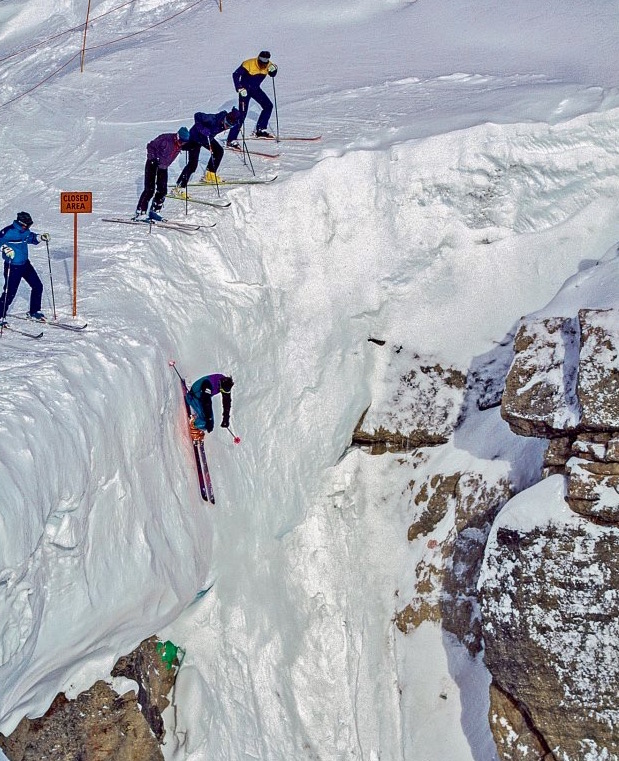 Ahead of Your Skis
14 Stocks Too High on Trumphoria

Skiing “double blacks” off the summit of Aspen Highlands is one of the craziest, most exhilarating things I try to do at least one a year. Getting that close to total disaster, and somehow still managing to have fun in the moment is beyond compare. The key is doing exactly the opposite of what you’re mind is telling you: Face directly downhill and get over your skis so the edges can bite the snow. Only one catch, don’t get too far forward, or you’ll tumble farther than you’ve ever imagined. It’s an apt metaphor as U.S. equities stage their strongest three-day rally since 2009, and a select few have ignored Ski Patrol altogether. Certain stocks perceived as beneficiaries of a Trump Presidency have risen as much as 35%, despite lack of specific news and an Inauguration still two months away. These stocks are WAY ahead of their skis… and just like at Aspen, the pending fall will not be pretty.

President-elect Trump is pro-business, anti-regulation and decidedly populist. Banks and Healthcare have rallied on his pledge to dismantle Dodd-Frank and ACA. Infrastructure has rallied on his promise to double Mrs. Clinton’s pledge of $250B over five years. Aerospace is up on based on a speech promising 15% increases for Department of Defense. Some of these are core tenets and likely to stick, others are harder to quantify, but the market has spoken.

Please note: My goal is to highlight some of the companies which have moved the most, and yet have no definitive catalyst on the horizon. I’m calling this Trumphoria. To be clear, these are highly opportunistic, short-term positions geared mostly for options traders. If they don’t feel appropriate for your own longer-term orientation, don’t do them. Instead, consider them provocative conversation starters with co-workers and clients about what could come next.

Financial advisory stocks have had a spectacular 3-day run since Tuesday’s election on the assumption a Trump Administration will scale back stringent rules governing how certain products are marketed to investors. Here’s the thing though… actually several things… this move is based on hope and what-ifs. First, the tougher Fiduciary rules meant to curb commissions and encourage brokers to promote funds from other broker-dealers (for which they generally receive lower commissions) are not even expected to take effect until 2018, so their ultimate adoption was already highly suspect. Second, the Department of Labor’s recommendation doesn’t preclude brokers from selling in-house funds, so they can still do it anyway and continue collecting profits. Third, Trump himself never directly voiced concern on this new ruling, it was simply criticized by Trump financial supporter Anthony Scaramucci. Fourth, Congress would actually have to reopen Dodd-Frank (which I admit it will likely do eventually), and repeal the entire law (good luck without a super majority) for this specific rule to get struck. In other words, this week’s 25% move is based solely on conjecture about major policy initiatives which may or may not happen over the next two years.

AMP’s top line revenue growth grew 1% last year and is forecast to decline 2% this year… not exactly inspiring. While bulls will argue it’s cheap at 10.8x forward earnings versus an average valuation of 12.8x since 2005, AMP has risen far too fast on far too little. It was in a secular downtrend pre-Trump, and his election doesn’t fix a weak company.

I’m inclined to express a negative view by writing December 115 calls at $2.00 with the stock about $110. This provides a little added cushion and generates an annualized return of 18.4% if the stock stays below $115 at expiration. 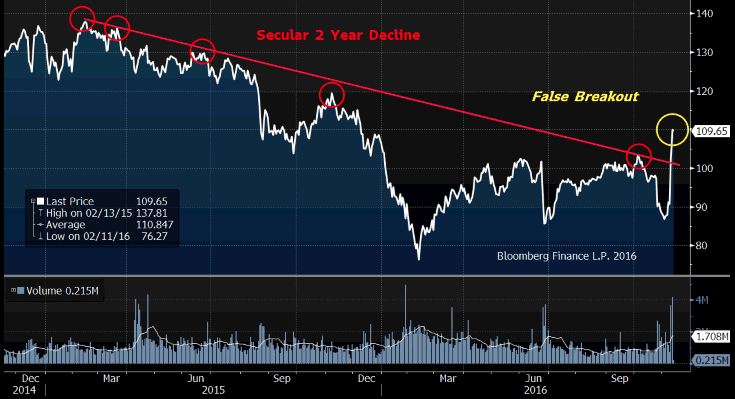 United Rentals, Inc. is one of the fast-money crowd’s favorite infrastructure knee-jerk trades –along with aggregates producers Martin Marietta Materials, Inc. (MLM) and #1 global copper producer Freeport-McMoRan Inc. (FCX). Traders swoop in to buy these names whenever politicians start talk shovel-ready projects creating “good paying jobs for hard working Americans.” The problem is few projects are shovel ready. In addition, Congress already approved a $275B Highway Infrastructure Plan last year. With taxes likely to decline, and a GOP Congress less willing to spend money it doesn’t have, the case for doubling down on infrastructure spending seems hard to imagine. True, Congress could pass something symbolic in the First 100 Days to demonstrate commitment and begin rewriting its “Do Nothing” moniker, but this is all speculation… and that’s exactly my point. Hope, hope, hope.

URI’s earnings growth has fallen from +41% in 2014, to +16% in 2015, to +2% this year. Analysts tracked by Bloomberg forecast 2% growth next year and into 2018 as well. If the country’s leading equipment rental company can’t do better than low single digits during the strongest construction boom in decades (the current number of hotels under being built will increase total rooms available nationally by 10%), then I fail to see how an as yet indeterminate infrastructure program will move the needle for URI. Higher oil and gas prices will boost demand for equipment, not campaign promises, especially in light of URI’s recent 1.7% reduction in rental rates.

I suggest writing the December 100 calls at $1.25 with the stock at $90. This position allows me to reflect a negative view while providing a12.5% cushion if the stock continues to rally. Looking at the chart, I have a hard time seeing URI rally above $105, however euphoric traders may get between now and December expiration. If the stock stays below $100 at expiration, this position generates a 14.5% annualized return. 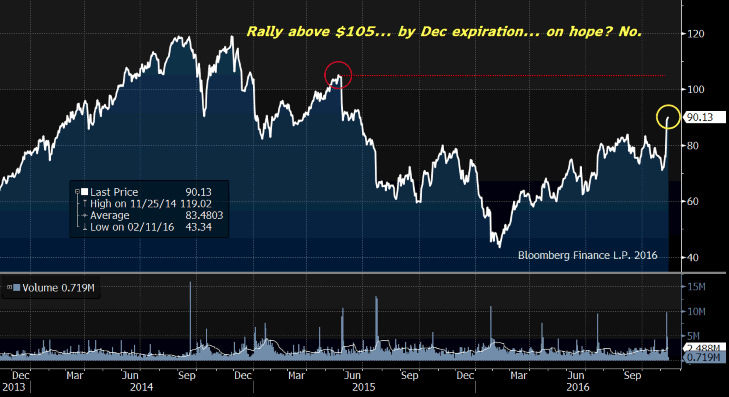 I found a total of 15 companies in the S&P large and mid-cap indicies rising on Trumphoria, i.e. potentially compelling fundamental catalysts which are as yet unsubstantiated. Please feel free to call me at 917.710.8347 if you’d like to discuss specific options trades. While not core to long-term fundamental investing, these positions allow us to test our intuition at the margin, and they are highly satisfying to get right.